4) Try not to use examples / supporting ideas

7) Write your version [Need to write in your own words]

Due to an increase in traffic between the various island which make up Japan, and predictions of a continuing growth in train travel, a rail tunnel was built to connect the islands of Honshu and Hokkaido. The Seikan Tunnel in Japan is today the longest tunnel in the world, with a length of almost 54km. When the tunnel was opened in 1988, all existing trains went through it. However, newer Japanese bullet trains have never used the tunnel because of the cost of extending the high speed line through it. Consequently, the train journey from Tokyo to Sapporo still takes about ten hours. In contrast, the journey by air takes only three and a half hours. This has combined with the fall in the cost of flying, has meant that more people travel by plane than train and the tunnel is not used as much as forecasters had predicted.

The longest railway tunnel in the world links the islands of Honshu & Hokkaido. This 54km tunnel was inaugurated in 1988 to deal with the predicted increase in rail traffic. However, the fall in the cost of flying and the fact that high speed trains cannot use the tunnel have resulted in the tunnel being less widely used than expected.

Writing a summary: The Sydney Opera House
The Sydney Opera House is one of the most famous architectural wonders of the modern world. Instantly recognisable both for its roof shells and its impressive location in Sydney harbour, it has become one of the best known images of Australia.Situated close to Sydney Harbour Bridge, this large performing arts centre was started in 1959 and completed in 1973. After a competition to choose the design, the Danish architect Jorn Utzon was chosen. The Opera House includes five theatres, five rehearsal studios, two main halls, four restaurants, six bars, and several shops.The construction of the Opera House was fairly controversial as the final cost of the building was much higher than predicted. It was expected to cost $7 milllion, but in fact, the final cost was $102 million. This was due to difficult weather conditions, problems with structural design, and changes to contract. The remarkable roof shells were also difficult to construct. Furthermore, the construction too longer than planned. Completion of the building was initially expected in four years, in 1963. Unfortunately, because of the many problems and changes which were necessary in the design, the building was not completed until ten years later, in 1973.It was inaugurated by Queen Elizabeth 2 on 20th October 1973, and millions of people attended the ceremony. The event was televised, and included a fireworks display and classical music performance.

The Sydney Opera HouseThe Sydney Opera house, has been described as ‘one of the wonders of the modern world’, is located in Sydney Harbour, Australia. Designed by Danish Architect, Jorn Utzo, this large performing art centre with numerous theatres, restaurants and other facilities, took fourteen years to build at a cost of over $100 million. The construction was seen as controversial as it was estimated to only cost $7 million but adverse weather, design difficulties and contractual problems made expenses spiral out of control. It was inaugurated by Queen Elizabeth II in 1973 at a ceremony televised to the world.
Adapted from Philpot, S & Curnick, L. 2011. Headway Academic Skills, Level 3. OUP 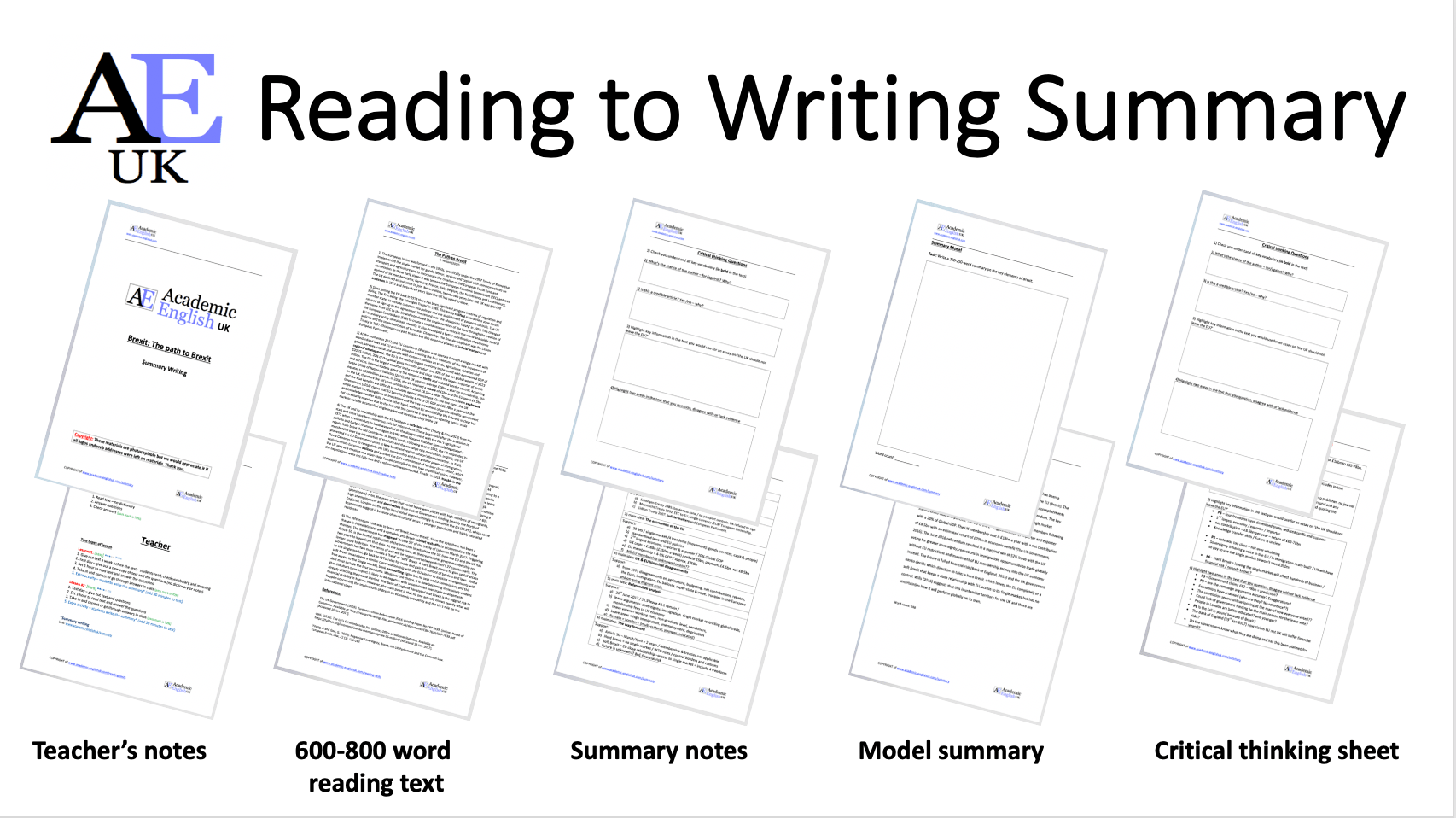 Summary Writing: The path to Brexit.

The text discusses the background history of the EU, its three key treaties and the economics of the EU. It then highlights the dissatisfaction of EU policy in the UK that led to the referendum and then explores the future policies of leaving the EU.   Level ***** [B2/C1] TEACHER MEMBERSHIP

Summary Writing: The causes of the 2008 Financial Crisis

The text discusses the background history of the financial crash through focusing on prime and sub-prime mortgage lending. It then explores the key reasons behind the profitable trading systems of that time, highlighting the collapse and then the following banking regulations that were introduced in 2009/2010.  Level ***** [B2/C1]  TEACHER MEMBERSHIP

The text discusses the rise of the gig economy and makes an attempt to define exactly what it is. It then highlights key gig companies investigating the importance and limitations of this new contemporary employment platform. Finally, it puts forward the future challenges of the gig economy for employees, employers and society. Level ***** [B2/C1]  TEACHER MEMBERSHIP

The text discusses the popularity of CSR and its historical evolution from the 1950s. It highlights the key values associated with effective CSR policies and examines the key challenges of implementing it. Finally, the author points out that there are still a number of areas that need to be addressed regarding transparency and better legislation. Level ***** [B2/C1] TEACHER MEMBERSHIP

The text defines the key points associated to globalization. It discusses the disparity of progression of trade between countries and highlights the integration of in-ward and out- ward looking policies. It finally points out that three key areas of international globalization are imperative for the economic growth of a country. Level ***** [B2/C1] TEACHER MEMBERSHIP

The text discusses what is academic plagiarism, what are custom essay writing services (writing mills) and why university students use them. It highlights the key problems associated with using these sites and offers possible solutions to prevent students using them. Students take notes on key idea and write a summary of 200-250 words. The lesson includes a critical thinking worksheet too.  Example. Level ***** [B2/C1] TEACHER MEMBERSHIP

New Summary – not in PDF Book yet!

AMAZING VALUE – buy all these texts and summary writings in one book. All these tests have been written by Academic English UK. TEACHER MEMBERSHIP

AMAZING VALUE – buy 5 texts with reading tests and summary writing activities. All these tests have been written by Academic English UK. TEACHER MEMBERSHIP

AEUK does not own the rights to the article: Text Download

AEUK does not own the rights to the article: Full Text Source